Samson’s Graphite MF8 USB MIDI Controller makes studio and on-the-go music production accessible to everyone. The Graphite MF8 features eight channel strips, each with a fader, parameter knob, Record and Solo/Mute button. It also offers a master encoder, DJ-style crossfader, transport controls and five assignable function buttons. With iPad/USB bus power and plug-and-play operation, the MF8 makes it easy to get the most out of your music production software in the studio and beyond. 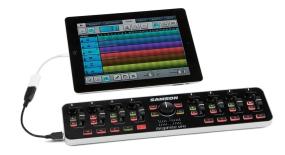 8 Customizable Channels with Faders and More

With the Graphite MF8, Keep watch over up to eight individual tracks concurrently for extensive sound editing. Each track includes an assignable fader and parameter knob, as well as a Record and Mute/Solo buttons. These features provide customizable Keep watch over over each track for making quality audio recordings and organizing quite a lot of parts of your creations for mixing and mastering.

Custom Keep watch over for Your Computer or iPad

Take Keep watch over of your music software with the Graphite MF8’s controller functions. It features a programmable master volume encoder, five function buttons, transport controls and a DJ-style crossfader, all customizable for the ultimate in hands-on Keep watch over. In addition, the controller offers left and right arrow buttons to Keep watch over more tracks, as well as five customizable Preset options that can be mapped to your software for instant operation with your favorite programs. And for easy connection to your computer, the Graphite MF8 features a mini USB port and comes complete with a USB to mini USB cable. When combined with the iPad the usage of Apple’s iPad Camera Connection Kit, the Graphite MF8 is a handy gizmo for making music on-the-go. Use it with your favorite music and synth iPad apps that give a boost to MIDI controllers. For additional mobility, the Graphite MF8 can be powered directly by the iPad when you are away from your desktop computer.

For use with the Graphite MF8, as well as Samson’s other mini USB MIDI controllers (M25, M32, MD13), a Graphite Editor Software can be downloaded for free from Samson’s website. The software can be used to customize MIDI workflow by creating presets on the editor and saving them to your Graphite MF8 for quick recall. Whether you’re a producer, performer or DJ, Samson’s Graphite MF8 USB MIDI Controller gives you all the music production Keep watch over you want for home studio and mobile applications.

What’s in the Box?

Samson Technologies began in 1980 as a pioneer in wireless microphone technology. Today, Samson is an industry leader in professional audio solutions whose products are known for their fidelity and reliability. Samson products are preferred by recording artists, performers, educators and audio professionals all through the world.

In the early ’90s, Samson began to expand the reach of their audio products through the development of power amplifiers, mixers, wired microphones and signal processors. In 2005, the first professional USB microphones to be used by musicians, broadcasters and podcast enthusiasts were introduced, making Samson USB microphones the new industry standard. Over three decades, Samson has grown from a small two-person operation to a worldwide enterprise, dedicated to innovating new products that will fortify the lives of music and broadcast professionals in all places.